If you have a question about a topic that is not covered here or in our FAQ, then please contact us.

How do I remove a restriction enzyme site from a coding sequence without changing the translation?

In this lesson we will remove an ApaI site from the SEC13 coding sequence (CDS). 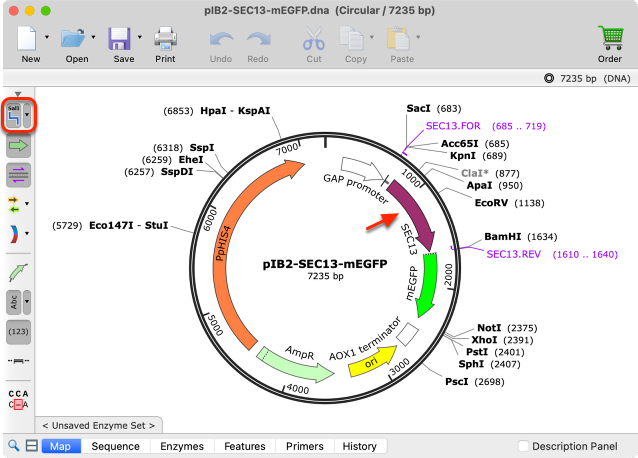 Open a file with the translated feature.

Click the "Enzymes" button in the side toolbar to turn on display of enzymes and show the enzyme site for removal. See the Guide chapter on Enzymes to learn more about how to display enzyme sites of interest on a sequence.

Select the Enzyme Site for Removal 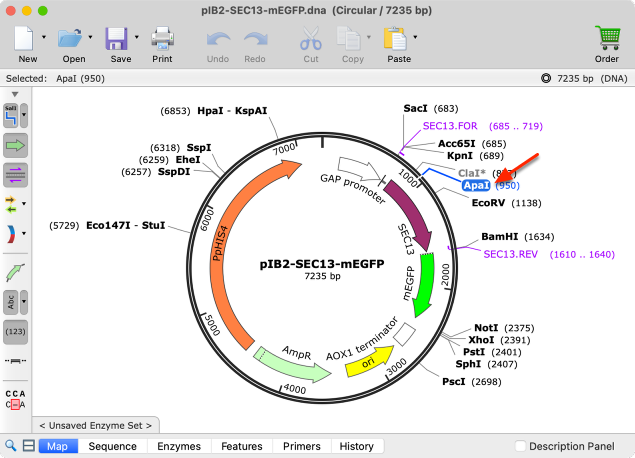 In Map view or Sequence view, click on the target enzyme site to select it. 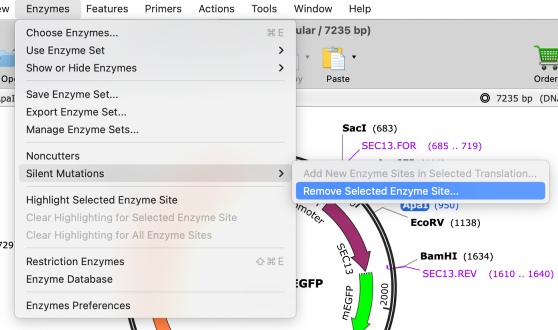 Select a Codon to Mutate 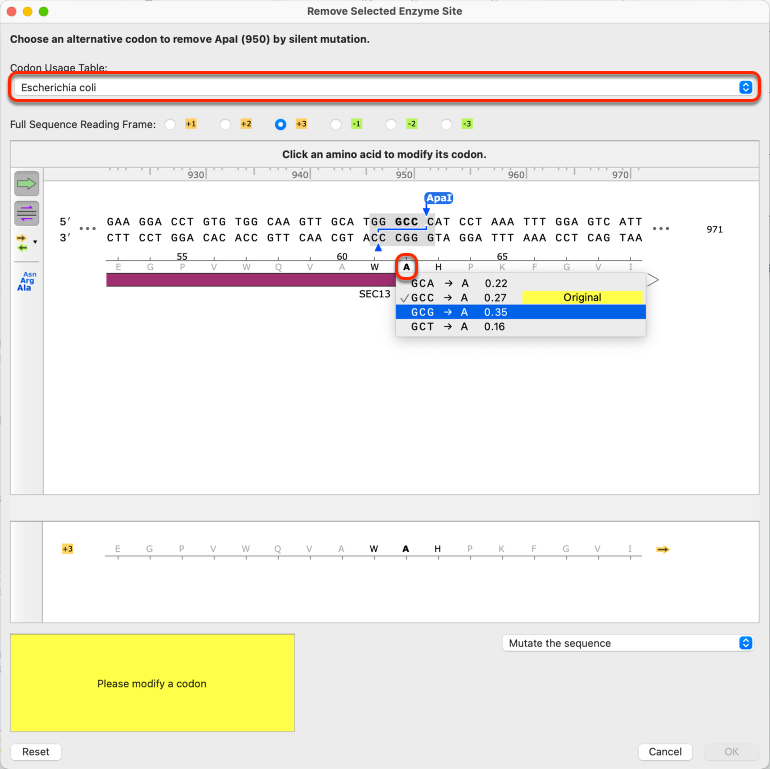 Click the dropdown and choose an appropriate codon usage table to provide relative usage frequencies for each synonymous codon.

An enzyme site usually spans multiple codons, so several codons may be able to be altered in order to remove a site.

SnapGene will not allow you to select a synonymous codon that preserves the targeted restriction site. In the above example, the His codon "CAC" is grayed out and unable to be selected, and is marked to indicate that a change to this codon will not remove the ApaI restriction site. 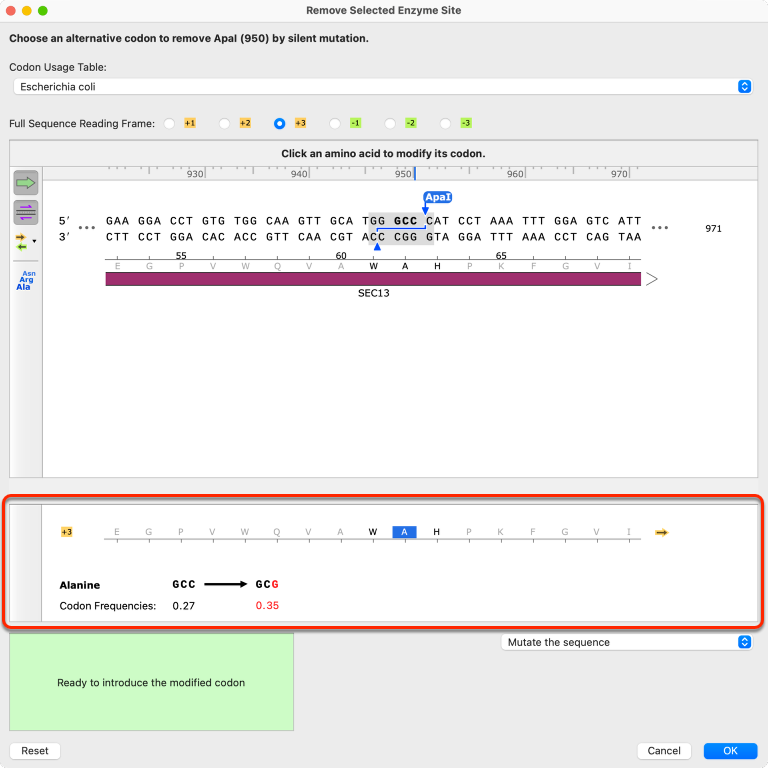 Once a suitable synonymous codon is selected the (unchanged) translation and codon change is depicted in the bottom panel.

Choose How to Add the Sequence Modification

Click the dropdown menu to choose how to generate or record the mutation required to remove the enzyme site.

Expand each of the following article sections to learn more about the different options. 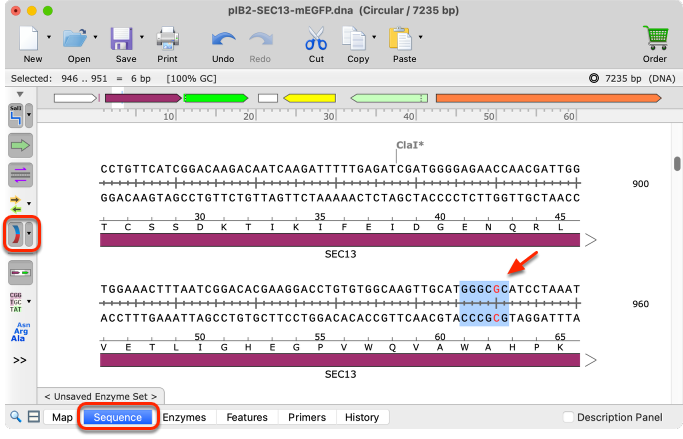 The sequence will be changed to remove the site using the selected alternative synonymous codons. Switch to Sequence view, and turn on History Colors via the side toolbar to highlight (in red) the nucleotide change[s] made in order to remove the enzyme site.

In History view the change will be recorded as a "Silent Mutagenesis" step, and will note the enzyme site removed from the sequence.

Click the dropdown and choose "Default parameters for Modified Codons...". 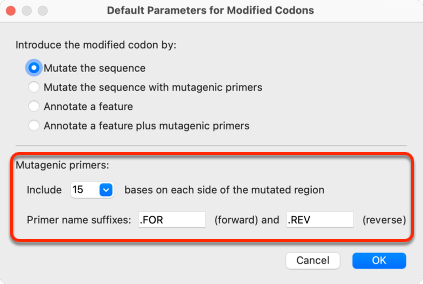 If required, change the default settings for the design of the mutagenic primers.

Select the option "Mutate the sequence with mutagenic primers".

Give the product sequence a name.

SnapGene will automatically design a pair of primers suitable for PCR-based mutagenesis, and simulate PCR and recircularization of the product to introduce the changed codon(s) and remove the target restriction site. 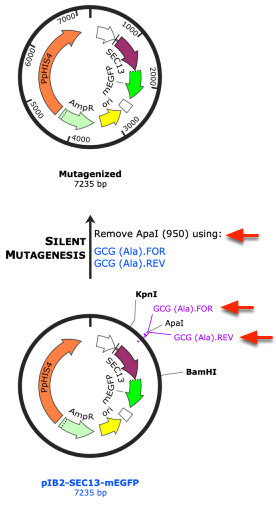 Choose "Annotate a feature" and click OK to add a feature to the sequence.

Note: The "Annotate a feature" option DOES NOT perform a mutagenesis step and the enzyme site is not removed from the sequence. No sequence change is recorded in History.

New mutagenic primers are added to the sequence, but no change is made to the DNA sequence. The primers for mutagenesis will show a mismatch at the nucleotide position(s) targeted for "silent mutagenesis".

Click File → Save to save the primer and feature annotations on the sequence.

Note: The "Annotate a feature plus mutagenic primers" option DOES NOT perform a mutagenesis step and the enzyme site is not removed from the sequence.